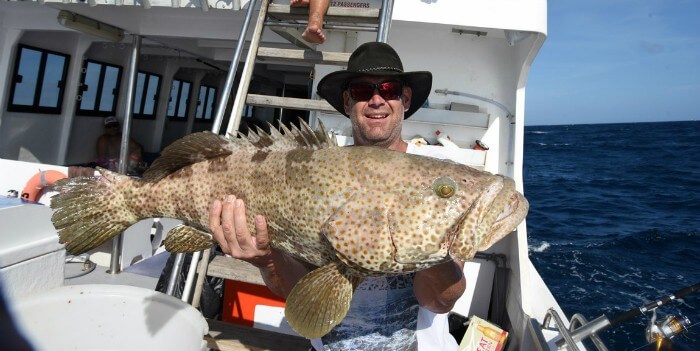 All arrived at the airport eager and with a few primed for a great trip.

Big Dom was hilarious and a tad anxious, letting his boys know that ‘the next call they made would result in him hunting them down on his return’

True to form Andy used the time at the lounge to visit Victoria’s Basement, whilst others used the time to taste a few beverages and stock up on ginger lollies.

At 8:00p.m we finally arrived at Townsville.
Humidity could be felt by all straight away so the decision was made, drop your bags boys and LET’S HEAD TO THE PUB

Straight away, groups were formed with some pairing off to enjoy the local entertainment, others pacing the streets looking for a good steak some staying put at the first pub and then the party boys giving it a strong nudge till the wee hours of the morning.

Arriving back at the boat and finding our beds, we were greeted by the crew and a very unsturdy French chef

It seems Fraser and Millsy took an instant liking to the chef (Rowley) with this trio of buffoon’s staying up till all hours of the morning talking shit and keeping some of the boys awake.

At the end, Fraser decided to sleep the first one out on the foredeck dining table so that either he wasn’t going to miss a bloody second OR that he wasn’t able to make it to his bunk.

Before we could even say Bon Voyage, two of the boys from Sir Reel packed their gear with Rhino having to get home for family reasons and quickly followed by Big Dom who packed up his shit and exited the trip

But that wasn’t going to deter the rest of us from that dream of catching that illusive trout, snapper and other pelagic we may soon meet

Most of us awake at 5:00am to the humming noise of the diesel engines gearing up for our big adventure, whilst others had not slept having been too excited and full of liquid testosterone.

I woke up at the call of the safety briefing to meet Vince who was the first victim losing sleep to the pissed stories being spewed out the night before.

By 8:00am and after having a hearty brekky and getting our rigs set up we were ready…Look out you fish, we’re coming to get you.

With the anticipation, the Gladiators cracked their first ale to quench their desire for the hunt about to be had

To my surprise, after setting up my trusty rig I soon noticed it was a bit larger than that of the more seasoned fisho’s who brought their own gear.

But on my third cast to those crystal blue depths, I picked up a nice 6-8 kilo Red Emperor, the first to be thrown into the catch.

Soon after hauls of Trout, Chinese Emperor, Bludgers and Mackerel were being dragged in from every angle with much cheers, backslapping and drinking to be had by all.

At about the third reef, the rain could be seen coming ever closer but that wasn’t going to beat us. Instead we donned our shirts and enjoyed it wash the blood and guts from us

Later that day, we heard reports on the two way that two more from Sir Reel had enough and had booked a chopper to air lift them off. We were stunned and trying to guess who that pansies were.

Just before dinner, both boats moored up together where we found that it was Johnny who had been airlifted out for what he would have thought cheap being the price of two bins.

His mate, Sarkis (Sticks) decided to tough it out (well done mate). Sticks was the first thing we would later see of Sir Reel with his black and white striped shirt remaining the whole trip as a good luck symbol for those who dared to stay on the ill fated Sir Reel.

At dinner, even though Bubbles Emperor was magnificent-Sir Reel was clearly in awe of our catch. I offered the boys on our boat to switch to Sir Reel but no-one wished to embark on a boat packed full of soft……cks in case they may suffer the same fate

Shall be remembered as Maxwell’s birthday.

On this day the seas heaved and we soon heard the reports of Debbie and the possibility she may be visiting us soon.

But on occasion, we needed to catch up with Sir Reel having to borrow from us things like Veggies and wraps to feed the skirts on boat

With the swell, Alex was soon no longer to be found and I reckon slept for about 22 hrs straight and only sighted driving the porcelain bus on occasion.

Back to fishing and whilst not so good as Day 1, Nick decided to try at some jigging and caught some really nice fish.

Sharks also seemed to find us wherever we went and they would enjoy a large chunk of our hard work.

Later that night, some watched the footy which was soon proven to be their downfall and resulted in quite a few upset tummy’s

On Sir Reel, Maxwell turning of age also turned their fortunes. They caught some great fish, nobody left and they even tested the night with a few nice wines and spirits.

During the night, the seas rose to about 3m swell and on our vessel which kept everyone awake and tested our spirits

True to form, our third Deckhand [Millsy] has cracked his first ale before brekky followed soon after by a good old burbs by smoko.

Others of us were not so tough and cracked the first can at 9:00 to see out the day

But on this day, though not beaten the weather was obviously not going to let up. In fact the only thing we could be certain of was to look out for the eskies at the back which were looking for any stray leg they could find as the slid from side to side.

With the dream of land and for Andy a massage, we made the decision-Skip get us back to shore and so he did. At full throttle he hit every bloody wave the great barrier reef could muster.

The tides turned and those skirts on Sir Reel were soon known to be the heroes of the trip as they displayed their catch to our disbelief.

The skippers gave the trophies of Best Fish to Bubbles with Nick getting the prize for Biggest Fish to enjoy.

Soon later, catches were divided up and boxed ready for the journey home.

At the airport, all went straight for a much missed brew of coffee, except of course for Millsey who still preferred his chosen Brew.

A quiet trip home with all of us shaken and stirred and those thoughts of that big one getting away still ringing in our ears.

All in all, despite the weather we had a bloody great time. One to be remembered and hopefully one to be enjoyed again.

To the 2018 fishing challenge wherever that may be.

We were tested and we won. We were challenged and we overcame (except for Dom & Johnny). We laughed , we joked, we drank, we worked hard and we conquered.

What a great trip. 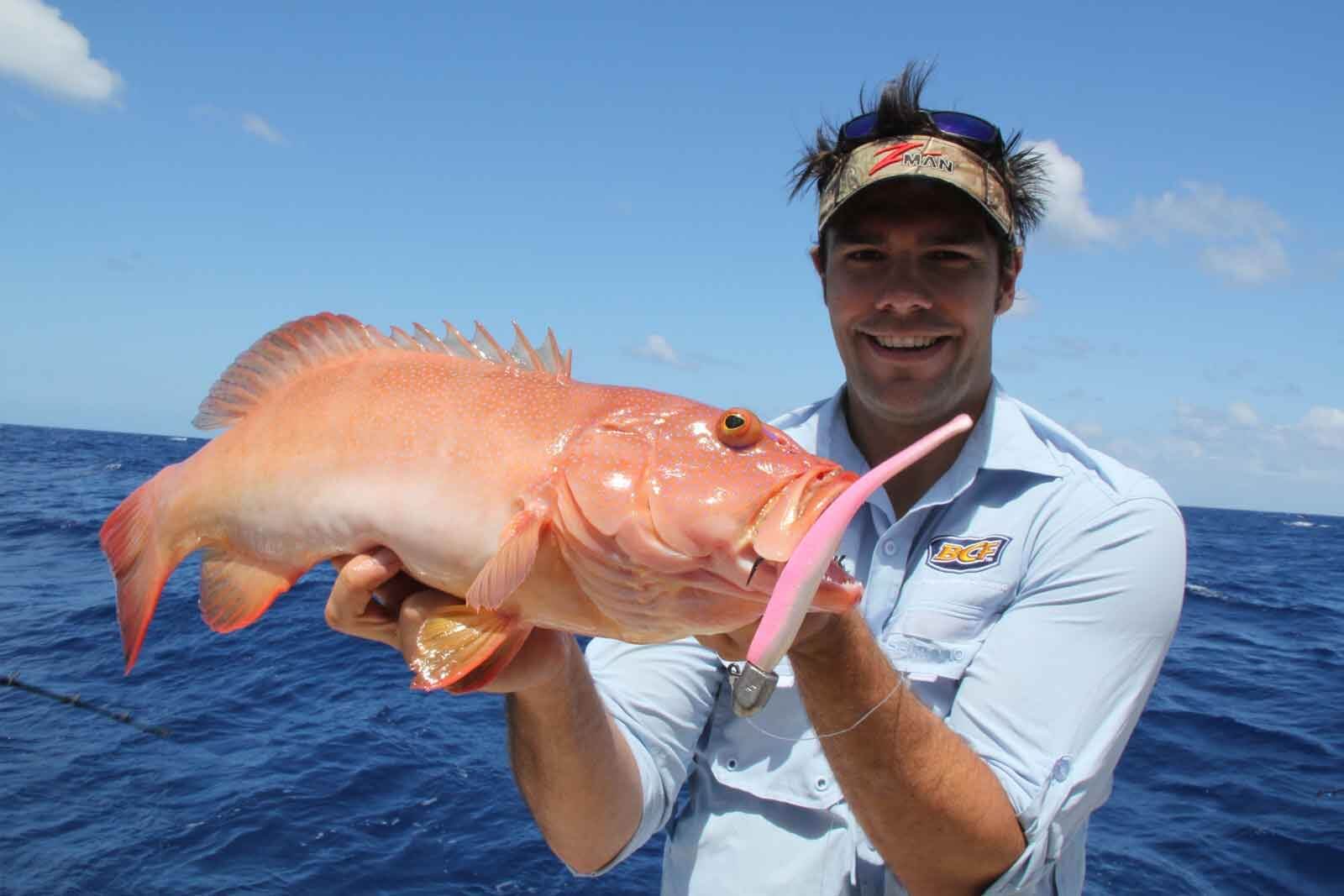 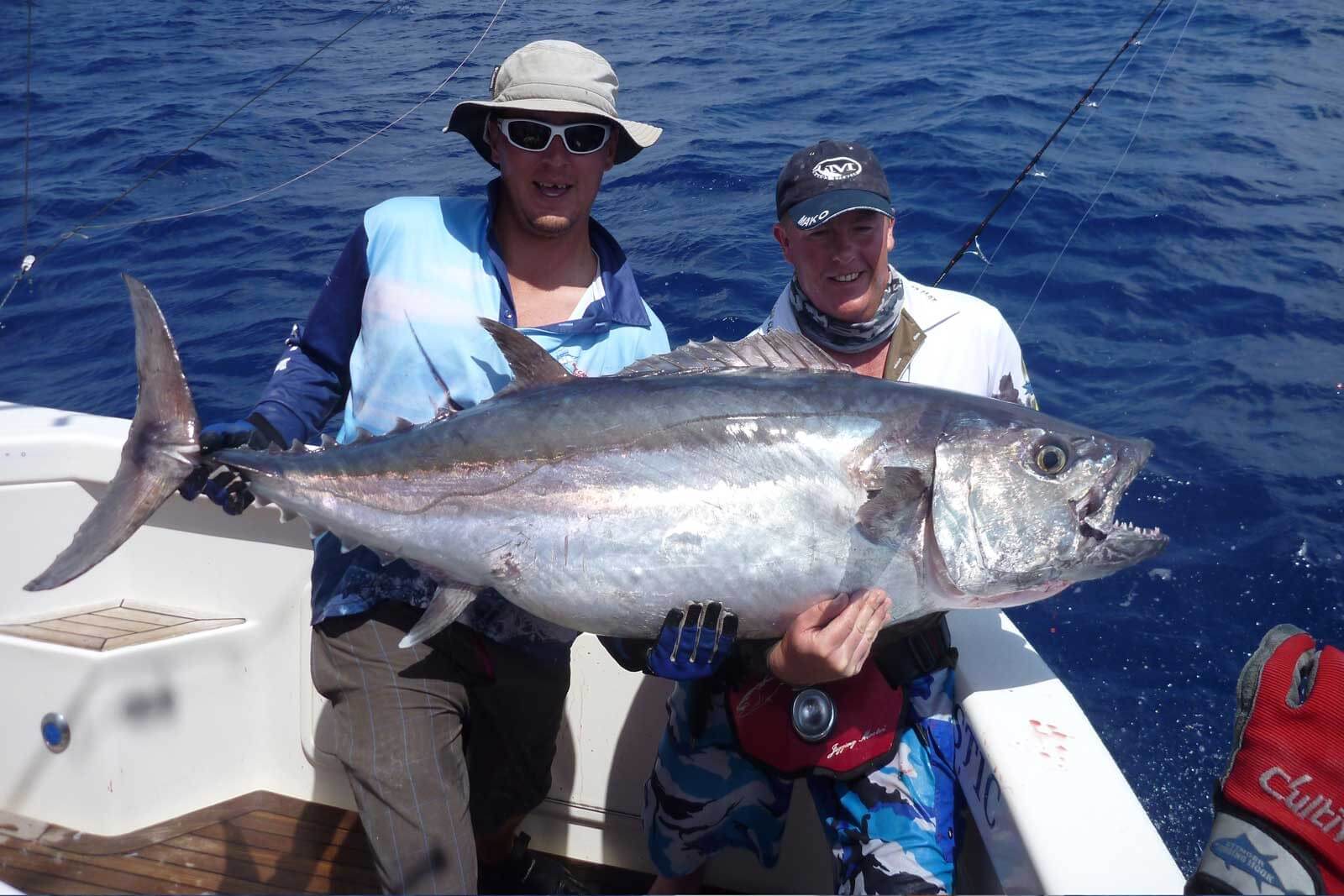 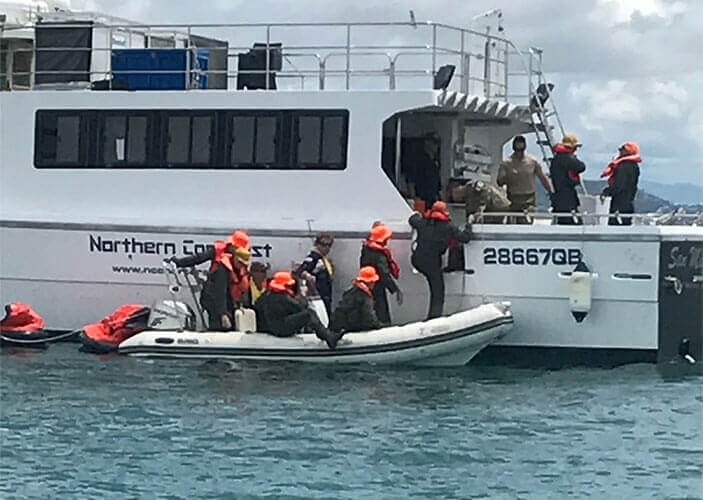 From time to time we offer special rates on shorter lead trips and joining our email database is the only way to be first in line.